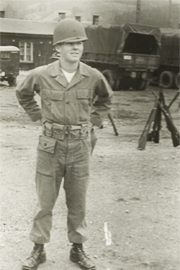 Sgt. Larry N. Phillips was a native of Emmett in the Rocky Mountain region of Idaho, who spent most of his Army career in Troop Information and Education work.

Phillips, an announcer for BDN’s Linz station, was the disk jokey for the request shows “Hillbilly Rise and Shine,” “Western  Round-Up,” which formerly was called the “Hillbilly Hit Parade” and for “Hillbilly Jubilee”. He began his military life on March 9th 1948, when he signed up with the Marine Corps. After attaining the rank of corporal, he was separated from that branch on April 3rd1950, and then enlisted in the Army. His first Army assignments were as an instructor and TI&E NCO for Leaders’ Courses with the 4th Inf Div, Ft Ord, Calif.- and the  101st Airborne Div. at Camp Breckenridge, Ky.

He  became  Regimental  TI&K NCO for the 350th Inf Regt, TAC CMD, soon after coming to USFA on August 30th, 1951, He also served for three months  as an instructor and  TI&E NCO for the TAC  CMD  NCO  Academy  at Camp McCauIey.

He joined the BDN staff in September 1952.